From Army fatigues to a business suit… well, really an SoA Blue hat!

This is the story of my journey from wearing Army Fatigues to a classy business suit, or more frequently, the famous SoA ball cap and a blue buttoned up shirt covered in the sands of the Sahel.

In a few short months, I transitioned from 14 years of active duty service in the US Army Special Operations to being a Project Manager at Spirit of America. As I left the military, I felt a need to continue my service to my country and its most critical missions, and to our forward deployed troops and diplomats. I, like my other colleagues, love being in the field in some of the most physically challenging security environments in the world, all while making a difference to those that serve the US and our partner nations. Unfortunately, in the military there often comes a time when one must move from operational field work to staff work and planning behind a desk in the rear – not the life for me.

On my first SoA trip overseas, I was lucky enough to be paired with my fellow Africa project manager, Nick, who showed me the ropes. Nick loves obscure energy drinks and potentially-fatal street meat. In an airport in Togo, he decided to buy poached fish empanadas from a man carrying them in a bucket. He found the bucket of fish so tasty that he went back for more. T and I try some of Nick’s beloved street meat while working in Niger.

While this was my first time traveling with Spirit of America, it was not my first time traveling to sub-Saharan Africa. While on active duty, I lived in Mali twice, first while working as a Civil Affairs Team Leader and then as a Special Operations liaison. I loved my time living in West Africa and was excited to go back as a civilian. As excited as I was to return, I went knowing that travel is never easy in Africa. I immediately found myself cramped into the middle seat for the 13-hour flight from DC to Addis, Ethiopia. Making this worse was that I flew past my destination, Niger, eight hours into the flight, all while the man next me slept with his head nestled on my shoulder; not to worry, he didn’t drool too much. Two connecting flights later and I finally got to Niger.

We were in Niger to support AFRICOM’s annual “Flintlock” counterterrorism exercise. Each year, a West African country hosts the multinational joint military exercise with approximately 1,900 soldier and civilian participants from more than 20 African and western partner nations. This year, there are exercise related activities happening in multiple cities across Niger, Burkina Faso, and Senegal.

Upon arriving to Niger, Nick and I were greeted by other members of the SoA team, Terrell (T) and Chris VanJohnson (VJ), as well as a good-humored local named Aziz. Aziz would be our local driver, fixer, and friend throughout our nine-day stay in Niger. On our first full day in Niamey, we had nothing scheduled until the afternoon. Nick, who had worked in Niger while serving in the military himself, suggested the National Museum and Zoo. The museum offered some interesting exhibits and showcased the different tribal and ethnic wear of the people of Niger. The zoo was unusual, if only for the unconventional conditions of the animals and exhibits. At one point, a zookeeper took one of Nick’s beloved energy drinks and handed it, through the bars of a cage, to a baboon for consumption. The baboon took a few sips of the energy drink and tossed the can aside – he prefers cola and cigarettes, we were told.

That afternoon we began our meetings with the partners we would be assisting with multiple projects throughout Flintlock. The first was a soldier in charge of coordinating the Women’s Peace and Security Symposium which addressed gender roles and the role of women in combating violent extremism. SoA piloted this event at Flintlock 2017, and we were happy to support it again this year through T’s participation and unique input as well as the provision of decorative African cloth distributed as a gift for participants.

Flintlock, a multinational exercise, presented me with the opportunity to reconnect with former colleagues from Mali while in Niger. These face-to-face meetings were invaluable and jump-started an upcoming project in Bamako supporting USSOF efforts and their commando partners. Despite all the work, we still found a little time for a boat ride down the Niger River to see hippopotamuses. The team takes a quick adventure down the Niger in search of hippos!

I’d call the first leg of the trip a success! I’m looking forward to the remainder of my time in Niger and the next leg of my journey to Cameroon. I’ll update you more along the way. 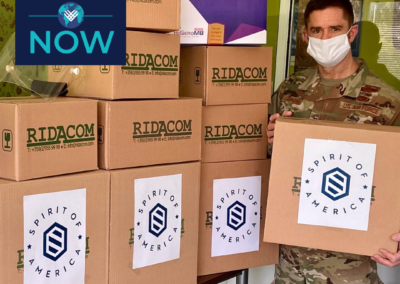