I just returned from N’Djamena, Chad this week, where Nicholette and I traveled to support the first ever Women’s Leadership Forum held in the capitol. The SoA-funded event was hosted by Special Operations Command Africa (SOCAFRICA) in cooperation with the US Embassy, on the eve of International Women’s Day, as a part of Flintlock 2017. Flintlock is an annual military exercise among African, allied, and US special operations forces that builds the ability of West African countries to defeat terrorist groups like al Qaeda in the Islamic Maghreb and Boko Haram.

The event was designed to create an environment for discussion about challenges and opportunities facing local women. With over 120 Chadian women in attendance, along with US and German ambassadors, the event was an overwhelming success! SoA’s Project Manager, Nicholette, participated in the Women’s Leadership Forum and had the opportunity to meet these incredible women from the Chadian military, police, and private sector, as well as female leaders within the US military.

The US Ambassador to Chad, Amb. Geeta Pasi, gave opening remarks in French, saying, “Because women are directly affected by conflict, women must be at the negotiating table for peace-building efforts and post-conflict decision making.” The keynote panelists from the business community and civil society and security sectors then gave their introductions. US Army Col. Katherine Graef, one of the keynote panelists and SOCAFRICA director of logistics, echoed the ambassador’s sentiment when she said, “While we are here today to celebrate and empower the women of Chad– the issue at hand is global. Dismissing gender equality as a ‘women’s issue’ leads to the erroneous conclusion that it is a ‘luxury’ issue to address if we have extra time or resources.” Over the course of the next two hours, the panelists took part in a question-and-answer discussion with the attendees.

The panel was comprised of four accomplished women who shared experiences and insights from their professional and personal lives. One of many women with questions for the US and Chadian panelists.

The Chadian women had many questions relating to women in the military and the barriers they faced. One woman asked, “Are women allowed to fight in the US military? Can they go into battle?” Another was interested to know, “Do women in the Chadian military get respect when they give an order?” And a third audience member wanted to know, “What are the barriers for women serving in the US military?”

One quote I thought was particularly powerful came from Col. Graef. She said, “Good leadership is gender blind. You earn respect, and if you do earn respect people will follow you because they respect you.” I had the opportunity to meet some of the women who participated in the Women’s Leadership Forum during the coffee breaks. Their feedback about the morning’s panel discussion was really encouraging.

Following lunch, the Chadian women delved into three breakout sessions to discuss education, health, and business, and the challenges and opportunities they faced. The groups quickly identified the major issues in their fields and communities and developed proposed solutions for those to present to the entire group at the end of the day.

SoA’s Project Manager, Nicholette, poses alongside the US and German Ambassadors to Chad, US and Chadian military leaders and the rest of the participants from the International Women’s Leadership Forum in N’Djamena, Chad.

It was a privilege to get to know these Chadian women leaders who are taking active steps to ensure women play a role in the growth of Chadian society. Before they left for the day, they all received a copy of this group photo as a memento of the progress that was made, and as a reminder of the work that is ahead. At SoA, we are excited to have had the opportunity to support this incredible event. Stay tuned for more updates from the field as we continue to support Flintlock 2017 this week. 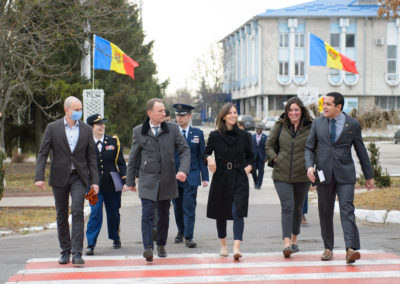